On Wed 7th March we were pleased to welcome Dr. Nicola Gould, Coordinator for Voices of War and Peace: the Great War and its legacy (based in the Library of Birmingham). 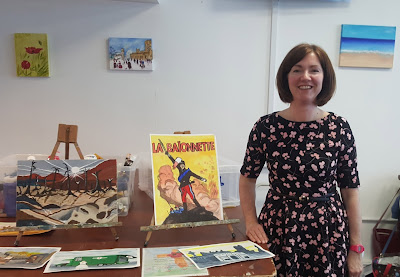 Most injuries were of shrapnel and rifle bullets wounds, and many wounds had become septic.
Shellshock was the most misunderstood medical condition of WW1, with affected soldiers unable to function normally. Symptoms included loss of appetite, anxiety and panic attacks, depression, nightmares, confusion, tremors, disorientation, limping, paralysis and impaired sight, speech, and hearing.

To aid recovery, classes and workshops were put on to keep the soldiers occupied. This would include sports exercise, art, theatre, and languages. Convalescence and Orthopedics units followed with donors making contributions to the hospitals.
At the end of the war, the injured were stigmatised, hidden away from public view, and even prevented from attending victory celebrations.

We thank Nicola for giving her talk.

Posted by Grace Newman at 18:54 No comments:

Painting for Pleasure is a group especially for disabled people and those living with or recovering from illness, including carers needing some respite and those who feel isolated.
Members are able to work on their own projects, at their own pace..
Sessions are held term time on a Wednesday at the Westbury Centre, Westlea Road, South Leamington Spa, CV31 3JE.
New members welcome.